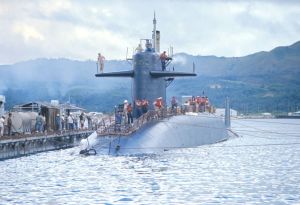 Bourne-Mark A. Hanson, 63, of Bourne, MA died at Tobey Hospital on Wednesday August 28, 2019.He had been battling cancer.  Mark was the husband of Lucila V. (Pierce) Hanson.  Mark was born in Natick, MA the son of the late Ralph and Mabel (Smith) Hanson.

Mark grew up in Wellesley, MA and resided there for most of his life. Mark graduated from Wellesley High School in 1974 and enlisted in the Navy. He served aboard the submarine, the USS Henry Clay CSSBN 625, during the Vietnam Era and then entered the Naval Reserves. After his service,  Mark became an HVAC Engineer and worked for 20+ years for Breyer's Ice Cream Co.  He then moved on to the pharmaceutical industry and most recently worked for Pfizer Corp. As a small child his daughter exclaimed, "My Daddy makes medicine!"  Mark was an avid boater and New England Patriots and Boston Red Sox fan. Proud of his service to his country, he wore a large collection of veteran hats. The hats sparked so many conversations with his fellows. Mark was fascinated with how every Vet had "their own story."  Mark was a member of Amvets Post 79 and the Elks.

In addition to his wife Lucila, Mark is survived by his children Blake Hanson and Lauren Hanson of Bourne, MA ; his sisters- Victoria Tripp of Riverside CA, Donna Hanson of Wareham, MA, the late Jane LIndsey and his brother the late Dana Hanson.  He was also survived by many nieces, nephews and friends.

Funeral services will be private. To leave a message of condolence for the family please visit www.warehamvillagefuneralhome.com

To send flowers to the family or plant a tree in memory of Mark Andrew Hanson, please visit our floral store.

You can still show your support by sending flowers directly to the family, or by planting a memorial tree in the memory of Mark Andrew Hanson