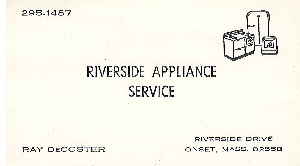 Bourne-Ray A. DeCoster, 88, Of Onset passed away on Wednesday, May 1, 2019 at the Bourne Manor Extended Care Facility with his family at his side.  He was the husband of 65 + years to Marlene (Monosson) DeCoster also of Onset.  Ray was born in Brockton the son of the late Lafayette N. and Annie (Porter) DeCoster.

Ray had a strong work ethic and worked many different jobs from his early childhood to adulthood.  He was known throughout the local area for many years as the Owner and Technician of Riverside Appliance Service, “Ray from Riverside” based in Onset.  Ray was also a former Foreman for the Onset Water Dept. and former Call Firefighter for over 19 years with the Onset Fire Department.  He enjoyed bowling, golfing and horseshoes.  He also enjoyed collecting antique postcards. He was a talented and often commissioned local artist, who often would use reclaimed lobster trap wood to frame his paintings.

In addition to his wife Marlene, Ray was survived by his children:  Eric M. DeCoster of Paxton, MA and Carolyn B. Abrams of Onset.  He was the brother of the late George DeCoster, Amelia Clark, Eddison DeCoster and Robert E. DeCoster.  He was also survived by many loving nieces, nephews, relatives and friends.

Ray’s committal service will be held on Thursday, May 9, at 11 O’clock in Centre Cemetery Tihonet Road Wareham.  Relatives and friends are cordially invited to attend. To leave a message of condolence for the family please visit www.warehamvillagefuneralhome.com  In Lieu of flowers memorial gifts in may be made to the Bourne Manor Extended Care Facility ”Activities Fund” 146 MacArthur Blvd. Bourne, MA 02532 Arrangements by Wareham Village Funeral Home 5 Center Street Wareham.